An innovative startup from the Norwegian west coast with the aim to minimize carbon footprints to preserve our planet’s climate.

We provide end-to-end solutions to our clients including carbon capture, utilization, storage and investments in clean energy solutions.

Get in touch with us regarding your questions about CO2 Management.

Carbon dioxide (CO2) is a natural heat-trapping (greenhouse gas), accounting for 81% of total greenhouse gases emissions in 2018. It allows sunlight to hit the Earth but also absorbs part of the sun’s radiation into the Earth’s atmosphere, thereby warming our planet. This is called the greenhouse effect. CO2 has two origins: natural processes like respiration and volcanic eruptions, and human activities like deforestation and combustion.

When the greenhouse effect occurs naturally, it warms the Earth enough to sustain life. CO2 is also vital for plants, trees and all living organisms relying on photosynthesis for their growth and survival. However, industries and human activities release further CO2 into the atmosphere, which intensifies the greenhouse effect and results in an alarming increase in temperatures - also known as global warming. Since 1880, the global average temperature has increased by more than one degree Celsius and CO2 emissions are at the highest levels in over 800 000 years. The impacts of global warming are rapidly intensifying and could be catastrophic in the long run. Depending on the location, the consequences of global warming may not be immediately visible. Even if changes triggered by global warming can be discreet and indirect, it does not reduce their severity.

Global warming is unfortunately already underway: temperatures are rising, glaciers & arctic ice sheets are already melting, heatwaves are a recurring issue, and global sea levels are rising. It is important to take actions and limit global warming to no more than 2 degrees, in order to avoid reaching tipping points triggered by climate change that would lead to irreversible changes in ecosystems. A tipping point refers to the point at which a small change leads to an irreversible development, precipitating a crisis. 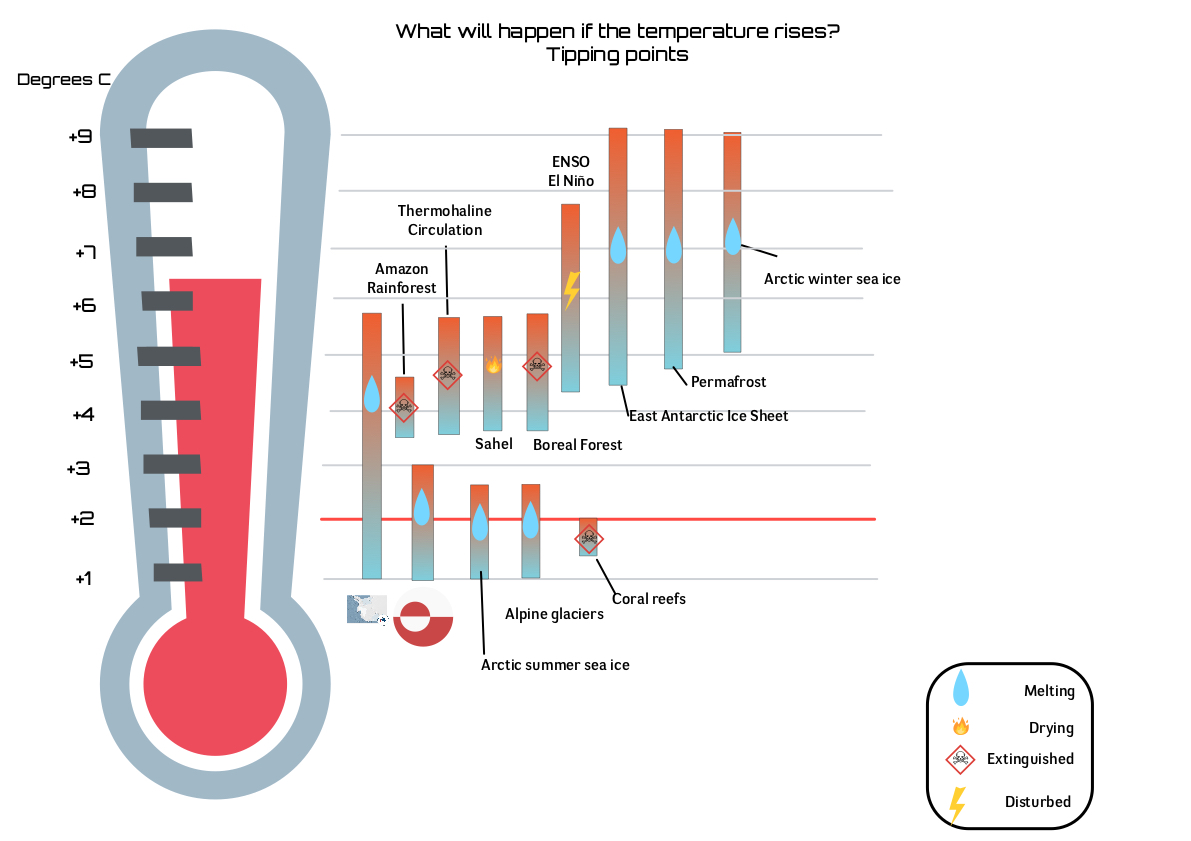 The Climate Tipping Points and their Respective Temperature Level

As evident by the figure, there are four major tipping points that are directly related to the 2-degree temperature rise set forth in the Paris Climate Agreement. Melting of sea ice in Antarctica & Greenland, and the Alpine glaciers is already underway. However, there is no absolute certainty about the exact temperature at which each tipping point is triggered, but the higher the rise in temperatures, the higher the risk of crossing multiple tipping points. For each sub-system, there is a range of temperatures within which lie its tipping point. For coral reefs, the tipping point will be reached in the interval of 1.5 degrees to 2.0 degrees which will lead to their full extinction. Once the coral is vanished, the reefs will also disappear, impacting animals, feeding grounds, marine life spawning and fishing and tourism industries. The sea ice on Antarctica’s west coast cannot survive a temperature increase of more than 5.5 degrees Celsius, whereas the melting of sea ice in Greenland will reach its tipping point in the range of 1.0 degrees to 3.0 degrees. The maximum temperatures at which Alpine glaciers and arctic summer sea ice will disappear are significantly lower, both having their upper limit at 2.5 degrees Celsius. Going above these upper limits would result in melting of sea ice and glaciers, which in turn results in increased sea levels and countries with low average altitude put at risk of being submerged. Sea ice and glaciers also moderate weather by reflecting the sunlight, and ice melting can result in dramatic changes globally, triggering disasters like heatwaves, intense downpours and hurricanes. Ice melting can also make the Earth enter a vicious circle, by increasing the share of the Sun’s radiation absorbed by the oceans, further accelerating global warming.

As illustrated in the figure, there are many other climate tipping points, and it is highly important to avoid reaching these and take immediate action in order to prevent irreversible damage and destruction to our planet. It is, therefore, crucial to keep the rise in temperatures as low as possible. The 2015 Paris Climate Agreement set forth a pressing limit of a 2-degree rise in temperatures, which formalized broad objectives for preserving our planet’s climate and preventing the adverse consequences of climate change.

Signed in 2015, the Paris Climate Agreement is the first ever global and comprehensive agreement aimed at mitigating climate change and global warming. Its primary objective is to limit global warming well below 2 degrees Celsius, an increase of no more than 1.5 degrees Celsius being preferable. This objective remains unreachable without substantially reducing greenhouse gas emissions, considering that greenhouse gas emissions – primarily CO2 – are the main cause of global warming. It is, therefore, crucial to implement adequate solutions in the short and medium run, and CCS and CCUS play an important role.

Given CO2’s atmospheric lifespan of 100 years, it is necessary to act now and reach net-zero emissions. However, given that a complete transition to carbon neutral fuels & energy sources is going to require several decades due to lack of economically feasible technology, it is important to incorporate CCS/CCUS in carbon-intensive industries to prevent further CO2 emissions until feasible carbon-free solutions are available.

Several models have been developed to predict our ability to meet the Paris Agreement goals and they have established with sufficient confidence that achieving the Agreement’s aims is strongly dependent on CCS/CCUS. Research suggests that between 20 to 40% of global GHG emissions can be mitigated by employing CCS/CCUS technologies. A study by the UN shows that without capturing and storing 10 to 20 billion tons of CO2 annually, it is impossible to achieve the goal of not letting the Earth’s temperature increase by more than 1.5 degrees Celsius.

Despite its proven potential, CCS/CCUS is no silver bullet, and the need for renewables and carbon-neutral energy solutions is not diminished. In the long run, that is a time frame spanning several decades, a combination of CCS/CCUS and other low & no carbon solutions is essential. However, in the near to medium term, CCS/CCUS is the most promising weapon to combat climate change with only half the cost of competing technologies with the same positive environmental effect.

Read more about the solutions we offer and how they combat global warming. 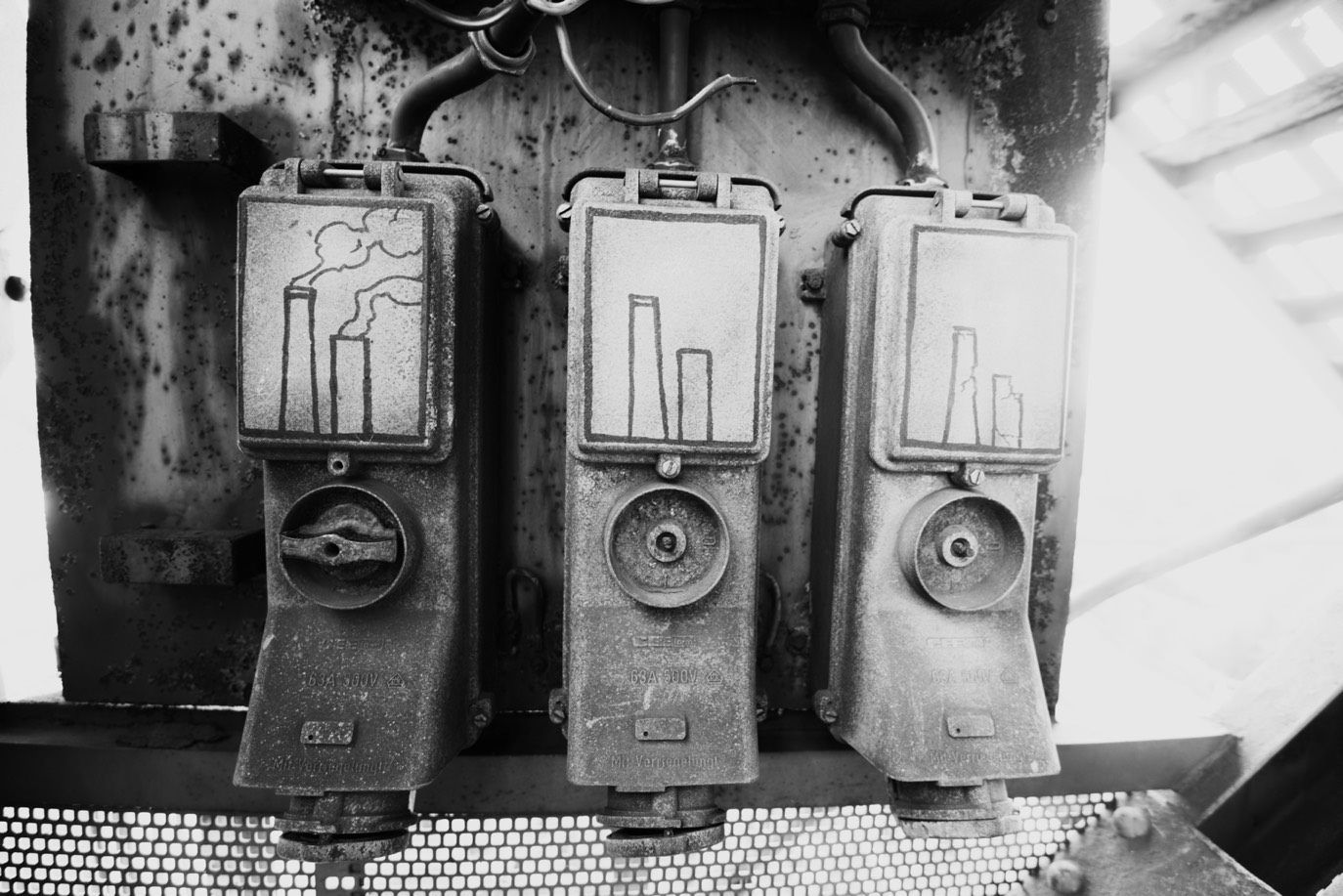